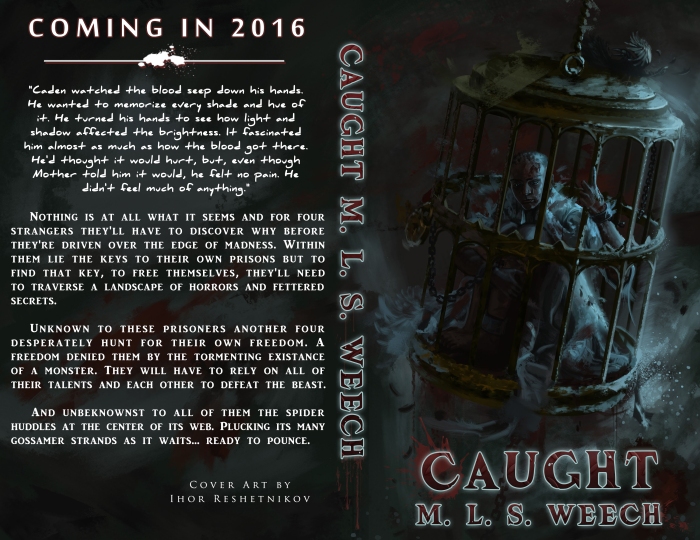 One of the issues I had with the last draft of Caught was the scope was too big for the size of the book.  Like most writers, my story tends to grow in the telling.  I fall in love with characters, so I want to give them more air time.  The problem this creates is the reader then wants more time.  Dom and Kira are, quite frankly, awesome.  They’ll be featured in Caught’s sequel, which I plan to begin writing some time next year.  The problem is, as awesome as they are, it’s not their book.  They’re secondary characters in this portion of the trilogy.

Just because a scene isn’t right for a book doesn’t mean it’s not great content though.  This is cannon. It may be a little rough, as it’s from a draft of the book, it did happen.  I just had to pull this out to limit the viewpoints in the book and help the book flow better.

This used to be in Chapter 8.  A special operations team is about to assault a rouge military compound.  Kira and Dom are the other half of the team.  There’s a scene break here, which jumps forward in time.  The other two members of the team are doing cool stuff.  That part is still (probably) going to make it into the book.  There aren’t any real spoilers here, so no worries.  It just allows me to present to you some part of the book I’m still hoping to put out in a few months.

From her and Dom’s position to the south of the warehouse, Kira took slow, regular breaths.  Looking through the night-vision scope of her PSG-1 sniper rifle, she had the north tower’s look-out lined up.  Dom, working as her spotter, helped her set up.  She knew her M-4 would be just to her left.  Dom was good like that.  Once you told him how you wanted a weapon to work and how you wanted it placed, Dom made it that way every time.  Now it was just the minor miracle of hitting her target just before the EMP went off.

She gave her target a little room to the left to account for the wind.  Focusing her thoughts, she lightly squeezed the trigger.  Five seconds.  Press…press…press..pr-POP!  She saw the spray of red mist flow out from her target just as she heard the rifle fire.

“Hit,”Dom said matter of factly as he flipped off his scope

“Go dark,”she whispered over the radio, turning off her scope.

She only just managed to turn it off before a blue light blossomed from the north.  It wasn’t overly large.  From her vantage point, it looked about the size of a basketball.  That gave her about one minute to take down one more target.  No pressure.

They had worked out her targets ahead of time, and Dom was already giving her wind velocity.  “Three knots coming west.”

She turned her scope back on and scanned east to her nearest target, who was already making his way down the steps.  He reacted quickly, which was smart.  Leading her target and adjusting for wind, she put him down before he could reach the platform between his tower and the ground.

“Hit,”Dom said again.  He had a way of making the most impressive feat sound like something any cross-eyed 2-year-old could do.

The compound exploded with activity.  There were no alarms, which meant Brandon’s little toy had worked, but that didn’t keep the company guarding the place from reacting.  They’d planned for it.  The general was nothing if not prepared.  Too much to hope they’d have an easy time of it.

They scurried toward exits, probably trying to mobilize the Humvees parked a few hundred yards from the compound.

“Moving,”Dom barked as he grabbed up his gear, his own M-4 and her PSG-1, and ran east.

Kira switched over to her M-4 and used short, controlled, bursts to provide Dom enough cover fire to move to his secondary position.  It was up to Steve and Brandon to infiltrate the perimeter.  She and Dom would do what they could from their positions.

Something, in Dom’s opinion, was wrong.  Oh sure there were plenty of decently trained corrupted traitors dying in the team’s containment zone, but not enough.  Not that Dom was anxious to kill.  He had switched over to the PSG-1, and one man trying to reach the east tower died in Dom’s sights a moment before the bastard could climb behind a M-240-B machine gun.

No, it wasn’t that he wasn’t killing enough.  It was the fact that there weren’t enough men reacting to the assault to account for an entire company. “East side clear,”he barked into his headset.

Switching back to his M-4, Dom kept his scope to his eye scanning the area.  He heard Kira’s footsteps as she passed him.  He started laying short controlled bursts of fire anywhere he saw potential threats.  Kira dove behind a barrel.  She raised up a hand, four slender fingers straight up.  He stayed in position and continued his cover as she reloaded.  She started shooting in the blink of an eye.  The woman worked weapons faster than anyone on the team, except for himself of course.  He couldn’t actually see her blue eyes, but he felt her wink at him.  She’d tease a man in the middle of armageddon.

He reloaded his own M-4 and moved to her position.  The large thirty-gallon barrel looked fairly small, unless you needed it for cover.  Filled with rocks, it made as good a place to hunker down behind as any.

Dom opened his mouth to suggest she see where the rest of the enemy company was, but she cut him off.

That was the end of that.  Nothing to do but continue the plan.  Step three:  Infiltrate the east side and flank the enemy.  “Moving!”Dom shouted.  He heard her resume her cover fire moments before bringing his rifle to his shoulder and charging to the base of the large metal swinging gate that marked the compound’s entrance.  Suddenly, a rumble erupted from the largest building in the compound.  It had a lot of square footage, but it was too low to the ground to be a hangar in Dom’s opinion.  Flames burst out of what few windows the building had.

Dom reacted on instinct, ripping off his ocular to keep the night vision from blinding him in the blast.  He instinctively stepped to the side to cover Kira.  She shoved him back.

“I’m fine,”she barked.  Oh she didn’t like the idea of any man protecting her, even with actual bullets flying and the possibility that she might be blinded by the explosion.  “My eye is closed, Breach.  I’ll switch the damn thing off in a moment.”

Dom began laying fire down.  The rest of what Dom was sure comprised the enemy company began charging out of every exit in the building.  Go to work!  he told himself.  Everyone had their skills, but Dom was, in fact, the best at this.  He literally put every one of the team’s weapons together, and he could use every one better than any other team member.

Dom put a .556 round into one asshole’s forehead before thumbing his selector lever to Full using fully-automatic fire to keep the bastards suppressed.  It was horrible.  The plan was perfect for any normal company.  But what asshole would order his company to burn the building down before they could secure their exit?  What morons would actually follow that insane order?

Caught is anticipated to be released in the fall of 2016.

If you enjoyed this scene, I think you’ll love the book.  If you’re interested in learning more about me or my work, feel free to contact me.