Book Cover of the Month of January

I never imagined this project would receive nearly 5,000 votes. It’s just really cool to see people come out and support the authors they love. To give you guys some insight, I’m about 10 days into March’s bracket, and I still think January is the strongest group of covers so far. That’s not to say there aren’t some great, well deserving covers coming up, but it was just an amazing month for covers. We’ll see how the other brackets stack up, but this was an awesome one.  No mater how great the competition, there must be a winner.

And the winner is…

If you read that post closely, know that I stand behind what I said. The cover has a feel to it that doesn’t appear in my wheelhouse, but it was (there’s really no non-pun way to put this) abel to grab my eye. Broken patterns are interesting, and the use of color was brilliant.  Simple works, and in this case, a clean design was all the artist needed.Let’s look at the stats!

Loveless had an amazing amount of support. She went up against some of the toughest covers with some very prominent authors and came out on top, and that only happens with an amazing support group and a ton of fans who love this book. It received 1,302 out of 4,770 total votes (27%, give or take what votes may come in the next 40 minutes).  A Gathering of Shadows received 1,091 (22%).  I thought Shadows was going to jump out to another amazing lead like it did in the Final 4, but Loveless fans came out of the woodwork. As I look at it (11:22 p.m.), Loveless won 725-543.  It looks like a huge win, but I promise, I looked at this just about every two hours, and this lead changed hands by 50-60 votes two or three times. 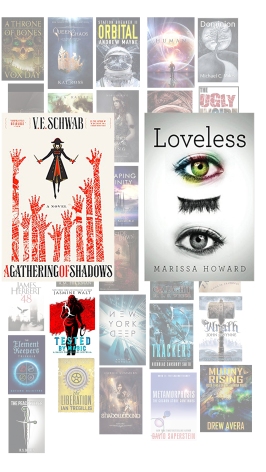 As promised, Shadows will receive a bid into next month’s tournament to round out the field of 32. So fans of Schwab and her books will still have a chance to help her move on to the Book Cover of the Year bracket.

Loveless is Howard’s first book. It’s a dystopian future novel, but I’ll let the summary speak for itself. Here’s the Amazon book blurb:

“Silence. After 74 years without laughter, without smiling, without touch, without kisses to dry dirty tears, this is what the world has come to know. Silence, and gray.

50 years from now, humanity voted to ban love from existence. It was their choice–a choice agreed on by everyone. So it was prohibited. Smiles were gone. Laughter was illegal. Kissing, hugging and touching were unthinkable. With each day that passed, eyes faded to a deep, empty gray.

But what humanity did not know is that without love, there was only hate. And this hate destroyed the world. It was a disease inside humans that burned everything in its path.

97 people survived this destruction. 97 people who took refuge in an old, gray bunker underground that compliments their gray eyes. This is where the story begins–13 years after the world’s end, with a people who know nothing except how to live in a world without love. No one speaks to each other. The thought of touching one another is repulsive. Their world is routine–meals, studies, Collaboration. It’s like this every day. Laney’s life is like this every day. The stories she has heard about what humanity used to be like when love existed are just that–stories. So she goes about her life like everyone else, living in fear and silence.

Until her people start to learn how to hate, and the 97 realize one, simple fact: that love is needed if they are going to survive.

With one final, desperate attempt, Laney and seven other teens–a boy named Nash with eyes a little less gray than the rest, a curious redhead named Theodore, Arsen, who keeps his face hidden behind dark sunglasses–are sent on a journey in the world above to discover love again and to bring it back to humanity before it’s too late. But every step forward is a step into the past, and a look into a life Laney is not sure she even wants to see.”

I’ve just purchased the book, and it’s officially on my TBR. (For those who are new to the deal, I buy the Book Cover of the Month to read and review in the future. I bought Manning’s cover, and it’s currently third on my TBR.)

Here’s Mrs. Howard’s Facebook page. Give her a like if you’re curious about her or her work.

I did have a chance to speak with her about the artist.  His name is Joshua Rafols.  I haven’t had a chance to reach out to him yet, but Mrs. Howard is working on getting me in touch with him. I did reach out to Amalia, (the artist who won last month), but she got caught up in some classes and hasn’t been able to get back to me as yet. If either does, I’ll post all their info. For me though, what matters most is that I do what I can to at least give them credit for a job well done. People don’t just sit around all day waiting for something to vote on. They have to care, and this level of support wouldn’t exist without dedicated fans and people who jus like clever designs.

Clearly I’m going to keep this up. I’ve even decided that I’ll purchase and engrave a trophy for the winning artist. I won’t get elaborate, but I think the artists deserve something tangible for their efforts, and this is my way of giving credit where it’s due.

I will continue to identify and select covers for each day from Amazon’s New Release section for fantasy and science fiction. If you follow and like my Facebook page, you can see what covers will make the bracket. February is already set up. Shadows, The Unleashed, Marked, and Dominion all received enough votes to earn a second shot, so they’ll join 28 other great covers in that bracket. If I can, I’ll post interviews from each artist.

This was a great month, and I hope those who voted will continue to support their covers and others. There are some great ones!  The March bracket launches March 1st. Stay tuned.

38 thoughts on “Book Cover of the Month of January”