Thornbear is the first book of the Champions of the Dawning Dragons series, which is the third series in the Mageborn saga. My review for the earliest series (Embers of Illeniel) is here.  My review for the central series (Mageborn) is here.

Spoiler Free Summary:  In Thornier, Gram, named after his grandfather, is a young man raised in the shadow of his legendary father’s name, but he doesn’t have the opportunity to prove himself as his mother refuses to allow him to work to become a knight. Just as he gains a secret mentor, he also meets a young woman who seems intent on winning his heart. He’ll have to choose which path means more to him when his friends are threatened.

Character:  It was nice to see some familiar faces in this story, but most of the book centers around Gram. Gram is just enough of his father to be endearing. His kindness and compassion do a lot to build sympathy. His earnestness (a key trait of his father) is what drew me in. What surprised me was how quickly I grew to appreciate the bear. (Her name escapes me at the moment, but she was probably my favorite character in this particular book.)  I will say this book doesn’t hold up in comparison with others from my perspective. This book is essentially a teen romance story. It’s a well told story, and if you like the themes in that sort of book, then you’ll love this.  I just don’t, though. It’s not a bad book by any stretch of the imagination. It just focuses on a plot line (relationship) that I’m not much of a fan of.

Exposition: This was pretty seamless here. The time jump in this book wasn’t as much of a challenge as the one I noticed in his earlier series. There are some scenes that slow the pace, but at least those scenes deal more with Gram’s training than his other challenge. 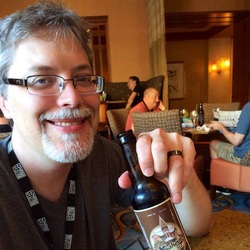 Worldbuilding:  What interested me most about this particular book was how Maning advanced the universe of his story as well as the magic he’d been using. I like it when one can see evolution in action, and this book has plenty of that.

Dialogue: If the romance between Gram and his lady friend didn’t have this dialogue, I’d probably be less of a fan. That said, the wit and interaction of these characters carried me through a plot line that isn’t normally my cup of tea.

Description:  I enjoy the way Manning can make description a part of the action. Most authors (including me) tend to have “blocks” of description. Here, the visuals (mostly visuals anyway) are a part of what’s happening. This allows the scene and setting to add to the story rather than interrupt it.

Overall:  I hung with this book because of how much I enjoy this universe as a whole. I don’t really think this one holds up against the others, but it’s enjoyable. The ending has a few big payoffs, and there was enough interesting material to hold my attention. Fans of young-love romance will like this far better than I did. CONTENT WARNING: I won’t go so far as to say some of these scenes are explicit, but there is definitely some material in this book that might challenge some readers. As is usual for Manning, this is treated in the interest of realistic situation, and the actions characters take have consequences.  This book does a better job of setting up the saga than anything else, but it was still cool to look at this new generation of characters.