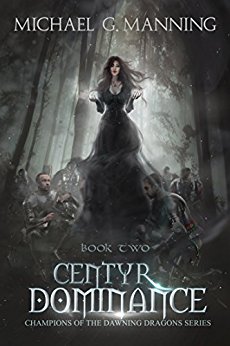 Spoiler Free Summary:  Moira Illeniel has an unusual history. She’s the ancient (and yet teenage) daughter of an even more ancient wizard from another family. Her biological mother’s ability allows her to tap into a great power, but that power is dangerous, and it can lead to darkness. She’s set out to find her missing father, but as things get worse for her, that power calls her to darkness; it calls her to let go of her innocence.  Between her and answers about her father’s location are a god and new, terrifying enemy.

Character:  Moira is my favorite of this series so far. Her character is so well-balanced. Her conflict is fantastic, and her struggle to maintain her innocence reminds me of her many times removed grandfather. Where Thorbear was a fairly adventurous story. This book is more action packed, and it also has a higher emotion rang.  I found myself invested in her, and if she’s rumored to be anywhere in any future books in the series, I’ll pick them up just to see how shoe’s doing.

Exposition: This is right on par with Manning’s best work. Yes, the dialogue becomes a back-handed way for him fill in the reader. That’s still better than just four or five pages of exposition just to help the reader know what’s going on.

Worldbuilding:  These new villains are just fun to meet. The characters are becoming more interesting. I can’t say enough how much fun it is to learn more about this world.

Dialogue: I felt this was pretty solid in comparison to his other work, which is a bit better than average for most. It’s not as snappy as the central saga, but it’s still solid back and forth at times despite the aforementioned exposition, which was used to help fill the reader in on some things.

Description:  I find myself picturing his scenes in my mind. The emotional description is sometimes lacking, but there’s plenty there to be happy about.  My point is, I feel like a I’m there when I read his work.

Overall:  This book required zero “hanging in there” like the last one did. Every page has conflict and tension. Every moment seems happy, but tragic. Fans of the saga as a whole need to pick this book up, because it stands out with one of the best in the timeline.