The Results Are In! The M.L.S. Weech Book Cover of the Year Wild Card Round Winners! 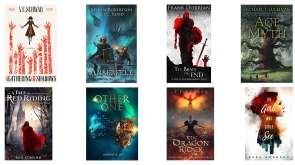 Five days of voting have come and gone, and that means it’s time to announce the last four seeds of the 2017 M.L.S. Weech Book Cover of the Year entries!

To say it was close doesn’t begin to give the statement justice. Three out of four of the elimination matches were decided by just one vote. I certainly hope everyone had a chance to vote and share. The fact is, I need a few days to get the tournament set up. I’m already concerned with how much I’m asking of people to vote on essentially four tournaments in two months. I’ve tried to walk the line between getting word out and pestering authors and followers. I hope I’ve done that.

Whatever success I’ve had, we now how the field of sixteen.  These are the four who moved on:

The Dragon Rider Vol. 1 by T.J. Weekes: Right from the start it looked like Weekes wasn’t going to be denied. She took the lead and never let it go. She ended with 13 people voting her all the way through to the winners’ circle and 52 votes overall. This is now the 13th seed.

Fate of the Big Bad Wolf by Neo Edmund: This cover earned the 14th seed with three voters calling it the best of all eight and 24 votes total.

The Other One by Amanda Jay earned the 15th seed with 20 total votes.

The Girl Who Could See by Kara Swanson: Swanson took the 16th seed with 20 total votes. 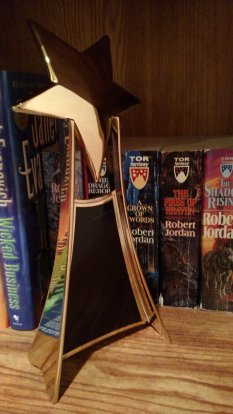 So it comes to this. Sixteen covers have been chosen, but only one will be named the 2017 M.L.S. Weech Book Cover of the Year.  Voting will start Jan. 1 and last two weeks.

My goal: I’m a fan of this sort of stuff, but I want it to actually mean something to the people involved. The best way to do this is to get as many votes as possible.  The Most votes we ever had in one bracket was 6,102 (May’s bracket). I want to shatter that record. My dream is 10,000 total votes. This is a (perhaps overly) ambitious goal.  First, there’s one less round.  In order to meet this goal, I’d need 2,500 people to vote all the way through. I can’t do this without all of your help plus that of the authors and artists.  I only have 400 or so followers here on my Blog, so I’d need all of you and seven of your friends to vote. I’d need half of my Twitter followers or three times my Facebook followers.  In short, I need help.

I expect (and hope) the authors call on their readers. But in order for this to be more about the quality of the book than the following of any one author, word needs to get out. Please help me make this as meaningful as possible. Even if it’s just 16 authors bringing their readers to the table, it’s enough, but it can be more with your help.

I look forward to seeing who will win.  I hope you are, too.

3 thoughts on “The Results Are In! The M.L.S. Weech Book Cover of the Year Wild Card Round Winners!”