The 2018 Book Cover of the Year Wild Card Round Begins! 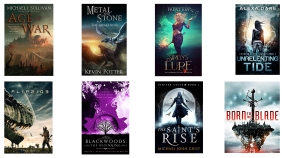 I decided to break this into a few posts so each one got the equal amount of credit. Also, those who want to vote in this round might not have wanted to slog through all of the November information just to get to the link.

THE 2018 BOOK COVER OF THE YEAR BRACKET HAS BEGUN!

Here’s how this round works:

Since I did a bracket every month, I have 12 covers, but the smallest bracket I can run here has 16 slots.  That means I need four more covers. Hence this round of the tournament. This bracket has eight entries. Winning is nice, but you only need to land in the top four of this bracket to get into the final Book Cover of the Year bracket.

This year’s wild card participants are:

1st Seed: Age of War by Michael J. Sullivan.  This cover was the runner up in July and received 709 total votes. All those votes came up short against Asunder.

2nd Seed: Metal and Stone The Awakening by Kevin Potter.  This cover was the runner up in March and received 307 total votes.

3rd Seed: Siren’s Lure by Frost Kay.  This cover was the April runner up and received 288 total votes.

4th Seed: Unrelenting Tide by Alexa Dare.  This cover was the October runner up and received 282 total votes.

5th Seed: The Flipside by Jake Bible. This cover was the May runner up and received 172 total votes.

6th Seed: Blackwoods: The Beginning by Teressa J. Martin and Adaline McMillan (I can’t find a webpage for them). As the November runner up, this cover was automatically in, but with 155 total votes, it got in on it’s own merit as well.

7th Seed: The Saint’s Rise by Michael John Grist. This was the December runner up and it received 150 total votes.

These covers all got in because they were received the highest number of votes in their respective runners up categories.  They’ll be matched up the highest vs the lowest. Again, you don’t have to win to get in (though that’s nice). You just have to get into the top four.

Because of what’s going on at Brackify, we’re on a tight schedule.  This contest will go from right now until midnight on Dec. 18.  That gives the 2018 Book Cover of the Year Bracket the two weeks it deserves.

I wish these books and authors all the luck in the world.

The link to vote is here.