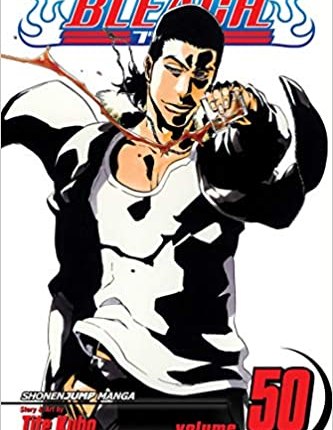 Spoiler free summary: In Volume 50 of Bleach by Tite Kubo, Ichigo Kurosaki is trying to adjust to life without his Soul Reaper powers. Things seem to be reaching a pretty normal (at least for Ichigo) rotuine when a man named Kugo Ginjo comes to town, promising Ichigo a way to get his powers back. But why is he doing it?

Character: If you’re not in love with Ichigo and his friends by Volume 50, I’m not sure why you’re reading this review or the series in question. What stands out to me is that Volumes 1-49 comprise a beautiful, complete storyline. So The future arcs really seem out of place given everything was wrapped up nicely. Sure, this Fullbring arc does connect to the history of Soul Society and Ichigo’s past, but it’s not so unique that I felt it demanded publication. However, I think if you loved Bleach the way I love, say, Mistborn, then more is something you’ll like. These new characters bring new dynamics into the worldbuilding that may not be as interesting as the previous arc, but it’s still cool. For Ichigo, the more interesting arc would have been to force him not to be the hero. I get why this arc exists, but it just feels like they did this to pump out more content, and that content only advanced one aspect of storytelling (see below).

Exposition: This is a manga, so get ready for several “the exposition boxes were solid.” I will say there is far more exposition in Bleach than Demon Slayer. Some is hidden in dialogue, but given how obvious it is, it can get pretty annoying.

Worldbuilding: So this is where the rubber meets the metaphorical road in these future volumes. If the politics and history of Soul Society are interesting to you, then this is your volume. If you want to understand the origins of substitute shinigamis and power activations in normal humans, this is for you. I’m just not one of those. But that’s not a bad thing. Mistborn fascinates me. I’m going to read all the eras because that world does interest me. However, Dragonriders is my favorite series every, but I only read the main arc. I’m not saying I never will, it just doesn’t interest me nearly as much as Jaxom and Ruth. So that’s what everything rests on (with the exception of fights, see below).

Dialogue: This is probably the weakest. Almost every conversation I can remember was basically the characters explaining the plot to me, and that annoyed me. It wasn’t the clever cat and mouse stuff from the previous volumes. There was almost no attention paid to the actual characters and their everyday motivations. Instead, the monologued about whatever info dump the author wanted to pour down the reader’s throat. The one character who acts and speaks like a normal character is brushed aside when the fighting starts.

Description: Here again is a point of emphasis for fans of anime and manga. What makes it good? If you think good manga is cool fight scenes with epic OP battle moments, this gives you what you want. But if you’re looking to connect more with new characters and new stories, I’m sorry. You’re going to be disappointed. You might get a brief, “trust me, I’ve had it rough” speech from some character here or there, but we don’t get time to know the character and bond with them, so these speeches fall short of the mark.

Overall: I have to say that I have a bias that might be unfair. I thought the end of the battle against Aizen was a perfect ending to a perfect story. I feel much the same way about this as I did about Season 5 of Supernatural. The most important thing any storyteller can do for his story is to let it finish, and none of these volumes did justice to the ones before them. But that doesn’t mean you shouldn’t read them. If you like epic fights, this is for you. If you are fascinated by the history of Soul Society, this is for you. This arc already puts an odd barrier between the heroes that I didn’t understand. It doesn’t address it or improve on it. It almost starts over in an odd way, and it’s not nearly as powerful as the first version. I leave you the right to decide for yourselves. Did I hate it? Honestly, no. It was OK, but it was just OK when before it was awesome, and that’s the reason some of this seems negative.