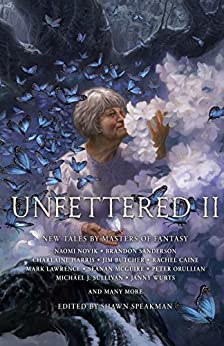 Spoiler Free Summary:  Figures by Rachel Caine is the ninth story in the Unfettered II Anthology.  A woman narrates what it’s like to be a duelist for higher (or at least that’s how my mind converts the plot). But the person she’s talking to has a plan, and the big surprise is that person’s identity.

Character:  This might be one of the shortest stories I ever listened to (eight minutes on the dot). There really wasn’t much time to do much of anything. This story is an interesting character study. It reads like something I might do if I were trying to develop a character, but there’s not enough here for me to connect with in my opinion.

Exposition: This is probably why the story didn’t work for me. Like I said above, this is all just seven or so minutes of a person describing her job. Sure, it’s an interesting job, but it’s still just someone talking about it. Then the last minute throws a curve ball out of nowhere that only left me more confused.

Worldbuilding: This is probably the best of the story. We’re in this world where people with beef higher gunmen to duel over the issue in question (at least from what I remember). That’s a really cool idea, like lethal Pokemon for grown ups. I’d be interested in reading an actual story from this world, but listening to someone describe what is essentially a plot idea as a story itself didn’t work for me.

Dialogue: I’ll have to give this an N/A. Sure, the narrator is talking to someone, but they’re not conversing.

Overall: I’m not going to argue one can’t make a thrilling eight-minute story. However, I think if I were to take a challenge to write an eight-minute script, the last thing I’d do is choose to have one person talk for seven of those minutes. The concept is cool in terms of the premise of what the character does, but everything else either dragged the story down or confused me.