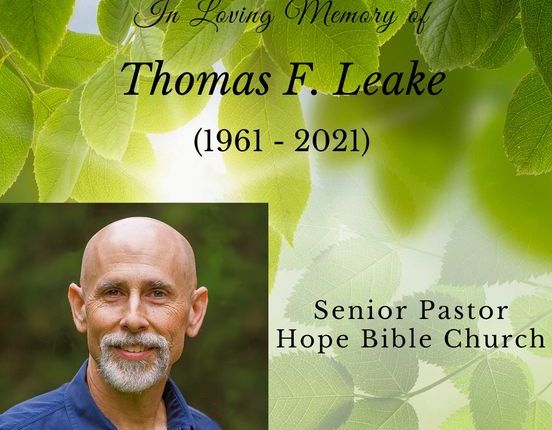 Obviously, this isn’t the next installment of Visits, but I have this unfortunate need, and this feels like the right place.

I may have said a total of 50 words to Pastor Tom Leake in person. I attended his Growing Disciples Class on The Sermon on the Mount. But I watched him the same way I watch all of my heroes. When I want to learn about writing, I watch Brandon Sanderson. When I want to learn more about how to coach the game of football, I watch Kyle Shanahan. When I want to know how to be a better Christian, I, of course, seek Christ, but I feel that Pastor Tom is as good an example to follow this side of Christ as any. It’s weird to write the word “is” because I learned March 26 that my hero died, and I’m not even sure how I feel.

I have many people I look up to. When I think about Pastor Tom, I looked up to him the same way I looked up to those who were much further off and less approachable. I’m certain we didn’t know each other as well as either of us would like, but he was so beloved by people he’s shepherded at our church for more than 22 years, and I’ve only been a member for just over two of those years.

So I wanted to dedicate this post to him and to Christ, who gave Pastor Tom a strength and conviction that is a testament to God’s power and mercy.

Somewhere around four years ago, I hated “organized religion.”

I’ve mentioned a few times that my home town had a lot of churches that were more cultish and hate based than anything else, and that led me to believe that’s what a church was. I wanted no part of it. I’d been to other churches. For me, it was downright frustrating to believe in Christ and yet feel confounded in trying to find a church that actually followed him. To be fair, I didn’t look very hard. I didn’t look much at all. I found a church in Virginia that I appreciated, but I live in Maryland now.

Then a friend offered the link to Hope Bible Church’s webcast of sermons. She told me to watch.

The first thing I noticed right away was that Pastor Tom opened a book of the Bible and just taught about that part. He was in Acts 2, and at the time of his death, he’d made it to Acts 14. It’s called expositional teaching. True, there were breaks in that to cover things like parenthood or how a church should function in society and how Christians should submit to leadership, but even those were grounded in specific passages of the Bible.

The more I watched, the more I realized Pastor Tom was this man who was grounded in faith, convicted in his belief and loving in his temperament. Some can argue I didn’t know him that well, and I didn’t, but that’s the man I saw, so that’s the man I’m speaking to you about.

Not long after my wife and I became members of the church, Pastor Tom was diagnosed with stage 4 pancreatic cancer. It was the second time he’d battle that condition. He was given less than a year to live, and he spent the next two years preaching, and I testify to you that he preached with as much fervor and energy as I’d ever seen. I watched for two years as a man’s clothes grew looser and looser. He moved more and more slowly. His strength and body rebelled against him. In his last sermon, he had helpers walk him to a lowered pulpit so he could sit while he taught scripture, urging others to serve the body of Christ.

I want to lie down and nap after I stub my toe, and this man preached about serving the church less than two weeks before he passed away.

That is strength, and that strength comes from Christ. This isn’t my statement; it’s his. Every day he spoke, he spoke about how Christ sustained him. Every day he preached, he talked about how it’s the purpose Christ has for him.

So I end this knowing what he would want. The last words I heard from him were for Christ, and if he had another second to live, I think he’d want to say, “Turn to Christ! Only he can save you.”

I am a sinner. I’m guilty of more sins than I can count and a number of sins I’d rather not discuss. There never was nor would be a thing I, as a man, could do to reconcile myself to God, the God of Abraham, the God of Issac, the God of Jacob. He is a perfect and holy God who can’t abide sin. So how do I approach him? There is no sacrifice I can offer. The blood of animals and the deeds of my life could never make up for the sins I’ve committed. There must be a death. So God, in his abundant mercy sent his only begotten son down to earth. He is Christ. Christ was born of a virgin, according to prophecy. He lived a perfect, sinless life in accordance to prophecy and by the testimony of those who served him and even the enemies who conspired to have him crucified. The crime he was killed for was speaking truth. They asked if he was the son of God, and Christ replied truthfully that he was. But they did not kill Christ. Christ, the son of God, the man who is God, gave up his mortal life. That was the propitiation for the sins of mankind, and his one sacrifice was sufficient for all of mankind. And those who turn to Christ, confess him as Lord and believe in him will be saved. More so, God raised him from the dead. And as such, death has been defeated, and we too can share in the eternal life our master Christ has if only we believe in him, pick up our cross, and follow him.

I don’t follow him or serve him anywhere nearly as well as Pastor Leake did on this earth. Pastor Leake has received his crown of glory in Heaven. I’m still struggling just to act like Christ is some small way.

May God rest the souls and hearts of those who truly knew Pastor Leake. If I feel such loss for a man I didn’t know personally, I can only imagine the pain and loss they feel.