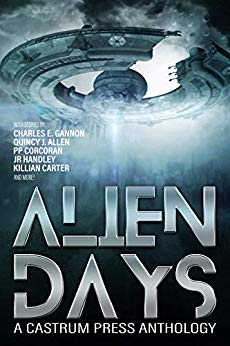 Spoiler Free Summary:  Discovery by PP Corcoran is the eighth story in the Alien Days Anthology. The crew of the Discovery is about to use integrated alien technology to test its first FTL drive to visit a far away planet. Will they make the jump? Will they meet their first alien race after this test, or is the test something completely different?

Character:  My primary grudge mentioned last week remains. I couldn’t name a single character or event without going back to look at the story. In this case, it took even longer. All of these authors are fantastic in research and description. But a great majority of their characters are sadly lacking, and this story continues that trend.

Exposition: The good news to not remembering much means I don’t remember getting angry at how slow the story moved. This is always a good indicator that the exposition is solid or even good.

Worldbuilding: This entire story takes place on a ship. There’s not much world building or character setting at all. We establish the plot, but we don’t set any scene.

Dialogue: Most of the dialogue was thinly hidden exposition used just to keep the plot moving. It wasn’t wooden, but it didn’t build character in any way.

Description:  Probably the strength of the story and probably the strength of the anthology. It feels like this story is an amazing outline for events and plot structure. However, it lacks any sense of conflict or characterization. This is even evident in the description itself, which is vivid in the science, but absent with the characters or scenes.

Overall: I think I’m onto something with the realization I came to above. All of these stories (or at least the bulk of them) read like rushed outlines that have pretty cool plots, but they didn’t bother to take (or have) the time to develop character and establish conflict. This story sums up to be the story of a crew that traveled across the galaxy, realized no one was there, and went back home. The end. The drama that this story could have had (the anticipation of meeting an alien species, the desire to learn from new cultures or the fear of facing more advanced beings) just isn’t there. That really just undercuts everything else for me. I’ve said it before, and I’ll repeat it every time. If a story’s characters don’t grab me, the story isn’t going to grab me either. This story might best represent the main issue I have with the entire anthology.

Spoiler Free Summary:  Ambassador T by Quincy J. Allen is the seventh story in the Alien Days Anthology. An expedition to an alien planet thought devoid of life leads to the discovery of a telepathic insects. These insects evolve and befriend the expedition, but that friendship comes with an apocalyptic cost.

Character:  Probably my main complaint with the anthology as a whole. The character in this story isn’t memorable for several reasons (one of which is a spoiler). The characters in most of these stories feel more like video cameras with names rather than people I’m learning about of whose heads I’m in. I can’t remember the character’s name, and (in my opinion) his name doesn’t matter much because he’s just a plot device. That doesn’t make this story bad, in fact, while still not in my top three, this story is one of the better ones (top five for sure) in the anthology. But it lacks greatness because it lacks true characterization.

Exposition: This is probably the strongest aspect of this story. It flows beautifully and let’s the plot build up to a perfect (if depressing) climax. It even has what I consider a bit of a, “Didn’t I tell you how this would end?” foreshadowing to it. It was impressive to see stories that tell a reader how things will end but still make that ending seem satisfying.

Worldbuilding: This was also a strength for Allen. This plot depends on careful research and detailed world building. It’s not world building in the sense of how many planets we see or how fleshed out one planet is. The detail is in the species mentioned above. Everything about this story is built on the knowledge of those creatures and how they evolve.

Dialogue: The dialogue here was understated in a lot of ways. It’s there, but it feels like it just sort of moves the plot. We don’t get a lot of characterization in it, nor do the characters’ voices shine. It isn’t bad, but it doesn’t add to the character.

Description:  Most science fiction folks would probably want more, especially your fans of Dune.  I was plenty happy with what I got. It was just enough to activate my imagination, and it didn’t beat me down to make sure I got it.

Overall: This story’s beautifully tragic ending is a bit undercut by the lack of character. Tragedies rely on the reader’s love for the character, so if the character isn’t there, the payoff when the tragedy happens doesn’t really have the impact it’s supposed to. Where I could have been just wrecked at this ending, I felt more like, “Well that’s a bummer. OH! I get that part from the beginning now!” It is a good story. It is well written. I just think that I didn’t connect to the characters, so the story didn’t resonate with me.

For those of you who follow me on Twitter or Facebook, you’ve seen how happy I am to have completed the third draft to Sojourn in Captivity! I truly feel this is the best thing I’ve written so far (which I honestly hope to say each time I write something). Now that I’ve had an editor take a look at it, it’s time for what I call my Beta Draft.  That means I need beta readers!

I’m sending out the call for any interested beta readers. I tend to like between 5-20 betas. In my mind, the more people who read it, the more feedback you get.  The more feedback you get, the more certain you can be about certain aspects of the story.  I’d like to send out the draft (31,000 words) Saturday, and I’d ask that you send your feedback (and a few very short questionnaires I have for each segment), by May 6. (That would mean you need to read at least a segment every other day.)

Sojourn in Captivity is a prequel, I guess it’s more of a novella now, but I’m calling it a short story, to my Perception of War space war science fiction/fantasy sequence.  He’s an off-the-top-of-my-head blurb:

Elele’s course in life was altered when Adhol (her planet’s name for God) arrived three years ago. Her life remained relatively normal even though she couldn’t travel to the Gernis home planet of Welt, where she was supposed to study with the greatest mathematical minds in the galaxy. She’s still her father’s favorite child. She’s still gotten everything she’s ever wanted that was within her school’s or family’s power to give. That’s all about to change. Since Adhol’s arrival, he’s used his power to elevate her people from vestigial-winged, slender beings known as Seferam into the membrane-winged, monstrously sized Var’lechen.  It’s supposed to be the greatest blessing a Seferam could ask for. It’s supposed to be when a Seferam evolves into a form that more closely resembles their god. There’s only one problem, Elele doesn’t want to transform. When she faces her god, she’ll discover that not only is her life about to change forever, but her family’s had secrets that she’ll have to come to understand before its too late.

I’d be honored if anyone cared to give it a read.  Please reply below or send me an email if you’re interested.

Thank you for reading,