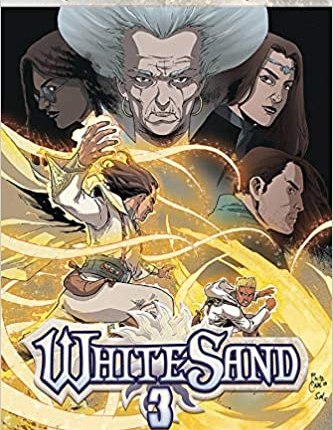 Spoiler free summary: In White Sand Volume 3 by Brandon Sanderson, everything comes to a head as Kenton fights for the title of Lord Mastrell. He must earn the respect of his peers, preserve his guild, and discover the reason for the murder of his clan.

Character: I appreciated Kenton’s progression here as a rebellious son to one who better understands his father. That might even be my favorite part of this trilogy, but that’s actually a bad thing. The final fight was pretty cool. I’ll mention more about that below. I think I saw a bit more development from some of the other characters, but my issue is with one of the side characters. He has a pretty big shift in the story, and I didn’t really feel like it was natural. He had a very minor role though (in a manner of speaking), so it didn’t have that big of an impact on my opinion. It was just something worth noting.

Exposition: I think this is where the exposition was the roughest. There was a lot of data to share, and it either came up in exposition/narrative boxes or in dialogue that was a bit more Scooby Doo than I would have liked (see below).

Worldbuilding: Most of the worldbuilding was established in the previous volume. There’s a bit of a reveal here that I thought was interesting, and the political reveal (which is an aspect of worldbuilding) was believable if not satisfying.

Dialogue: So the aforementioned Scooby Doo. There really was a scene here were the Kenton calls someone out, and the guy gives a speech very akin to a villain’s Scooby Doo speech. The only thing missing was, ” … and I would have gotten away with it, too.” That one scene was certainly a bit corny, but the bulk of the dialogue was crisp and witty. It might have been enough to bring the quality down a few pegs, but it didn’t ruin the whole story.

Description: This was probably the place where the graphic novel adaptation was at its best. Sure, there were other scenes that looked cool to see in the other volumes, but the pace and style of this final volume. That fight was cool to watch, and the scenery and scope was brought to life as well.

Overall: I think I’m being unfair, but I can’t help it. I’m used to epic storylines with vivid description that lets me play the movie in my head. I’m used to prose and style that pull me along. I’m used to deeper plots that let me get to know a character, and this format just doesn’t allow for that. But, if I were being fair, I wouldn’t have bought this graphic novel if it wasn’t Sanderson and Cosmere, so I wanted something that felt like one of the other Cosmere books. Maybe I just wish it was a longer series. Maybe I wish the plot wasn’t centered around political intrigue (the assassins and sand magic were tertiary devices at most). It’s not a bad story; it’s just not what I love about Sanderson’s other work. I think fans of the Cosmere should still pick it up to know what happened and get to know the magic system, but it’s not his strongest story. 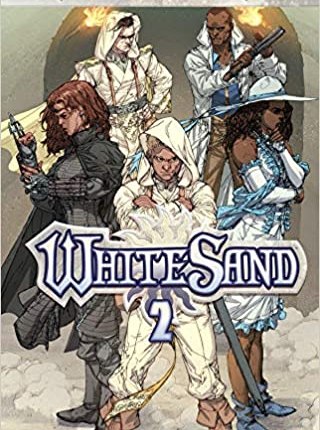 Spoiler free summary: In White Sand Volume 2 by Brandon Sanderson, Kenton ends up Lord Mastrell by default, but the Sand Masters who are left aren’t necessarily fully supportive of him. The ruling council is out to end the guild. Oh, and did we mention the assassins? The only person he can trust (if only a little) i s Khriss, a visiter from the dark side of the planet who has her own goals. Can these two work together to save the Sand Masters guild?

Character: Kenton’s growth here is more as a leader and a negotiator, but the man who strove to earn his father’s respect is starting to see his father in a different light. I stand behind what I said in last week’s post, but character growth is definitely something we see here. Not only does Kenton grow as a character, but his journey as the Lord Mastrell causes him to grow in literal power as well. This is one of the strengths of the trilogy.

Exposition: I feel more or less the same about the exposition in this volume that I felt for the previous. The exposition blocks were more scene and background portions of exposition. The story moved fine, but it didn’t pull me along.

Worldbuilding: The worldbuilding picks up in this volume. It’s more political than any other aspect of worldbuilding, but there is some development in the magic system. That’s probably the part that interested me the most. I have to say it wasn’t quite as prominent as I’d have liked, but it was enough to keep me interested in a story that more politically driven than by mystery or action.

Dialogue: Once more the graphic novel format allows Sanderson’s typically witty dialogue to shine. It also helps drive the plot even if it’s harder to hide the expositional dumps that are normal in dialogue. The story is at it’s best when Khriss and Kenton are talking, though there are some other conversations that stand out.

Description: I felt like this volume was oddly (strangely) segmented. The idea may have been to weave the political intrigue alongside the assassin plot. So there were some incredible skirmish panels, but there weren’t the fight scenes that normally carry a graphic novel. So it’s good art that lacked the truly epic imagery that we normally find in these limited series.

Overall: This was a setup volume, and I think most trilogies would have this same style, so you can’t really hold it against this particular story. It sets up the drama and establishes a bit of mystery. I still affirm this story would be far better in a longer medium, but it’s an interesting story. 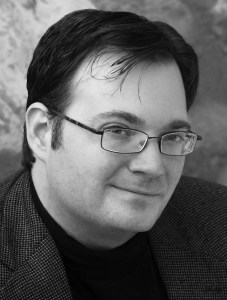 Spoiler free summary: In White Sand by Brandon Sanderson, Kenton aspires to be a master, but he’s barely able to control on stream of sand. That doesn’t stop him from taking on a challenge only a master could overcome. No test, however, can prepare him for the events of the future. His guild is devastated by betrayal and murder, and Kenton must rise up despite his lack of power.

Character: Kenton is a fine enough character. I like his drive and effort. The most interesting part of this book is that Kenton is weak. Most stories reveal a main character who discovers a great power. Kenton is probably the best part of the story.

Exposition: So it’s here that I’ll I’m not a fan of the graphic novel format for Sanderson. I’ve been trying to put my finger on it since I finished reading it a few months ago, and I can’t really identify it except this: the graphic novel deprives a reader of Sanderson’s prose and perspective. So while the story was ok, it lacked the life Sanderson writes with even with the quality of the art. The story didn’t drag, but neither was I pulled along the way I was with nearly every other Sanderson book. Yes, I’ll probably check out Dark One, but I was surprised to realize how much I missed Sanderson’s writing.

Worldbuilding: This is a strength of Sanderson’s, and lack of prose didn’t diminish that. The world is interesting. The way the magic system works within the society is interesting. I feel like this got right what Elantris didn’t do so well for me. I am of the opinion that Taldain has a much bugger role to play in the Cosmere than it currently has, so I may think more highly of some aspects of White Sand’s worldbuilding than is justified, but at its worst, the story’s worldbuilding is comparable to most Sanderson stories.

Dialogue: Where I really missed his prose in some areas, I think the graphic novel adaptation did Sanderson’s dialogue justice. The characters were unique. The conversations weren’t just vaguely hidden expositional blocks. The dialogue was even charming in some places.

Description: This was the other area I felt hurt the story for me at least in regard to Sanderson. Sure, the art was well done, and it was cool to see the power work in a visual format, but I felt like my imagination was deprived of its ability to visualize the story. It’s kind of unfair to say about the format, but it is how I felt. I think another aspect was actually how there weren’t a lot of fights. White Sand is more of a political drama than an adventure story. It has fight scenes, but they aren’t what drive the story, so a graphic novel loses some power without a lot if great fights to give it that cinematic feeling.

Overall: I’m glad I read it, and it was an OK story, but I hope Sanderson doesn’t release that much stuff (especially Cosmere stuff) in an exclusive graphic novel format. The story doesn’t have the same power it would have in a fully fleshed out Sanderson book. However, I’d take a graphic novel version as opposed to nothing.