Last weekend, I was pedaling my wares author style. Balticon was a fun time. I was pretty much surrounded by other authors and other cool folks, just talking shop and getting to know people.

I wanted to share a few images from the event. 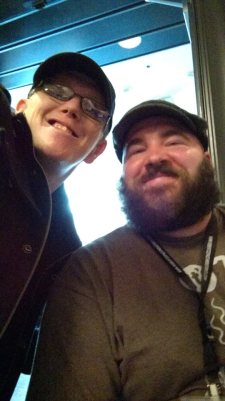 Steve here was selling custom etched glass with his wife as part of +2 Charisma. I think I spent the bulk of the convention either talking to him about writing or talking to my girlfriend about whatever made us laugh the hardest.  I think I love talking about the craft more than most, and he seemed equally enthused.

Willa Snap here just had an amazing cosplay outfit. I felt odd because she’d been around the table a few times. I eventually got worried I wasn’t going got get a photo of her, so I sort of walked up to catch her, hoping people wouldn’t call me a creep.   I asked her permission, which she appreciated, and she let me grab this image. I don’t really know the character or even if it is one, but it’s a great outfit.

This cosplay individual wanted it clear this character was Not The Brave.  I think most cosplay people really think highly of those they dress up as, and she seemed to prove the theory.

K.S. Brenowitz is a  cartoonist and illustrator who’s just charming and adorable as all get out. I actually first met her at an AwesomeCon (I forget which year), and she pretty much wears that sort of outfit normally. She’s a great artist, so if you like comics, check out her site to see if her art is your flavor (because art is a very niche thing).

Yes, I did sell a few books.  I didn’t clean up, if I’m being honest, but I did sell some books, and John here was my first customer.  So there I was, literally praying, trying to keep up my faith and my confidence. I was telling my girlfriend how I had to just keep plugging along. There wasn’t that much traffic, and a guy with two paranormal books might have been out of place at a convention attend by hard scifi readers.  Next year, when I have The Power of Words, I might have a bit more luck. Anyway, I was really at a low place, worried I was doing something wrong when John shows up an asks about my books.  Here’s the coincidental part.  He’s not wearing cosplay.  Jon is literally a priest.

I don’t want to get into too much, because I don’t want anyone to infer that Balticon isn’t good or there wasn’t a ton of fun.  I didn’t have any panels. My books weren’t really in line with the audience this year (it changes from year to year).  This year felt a little slower. So I didn’t sell a ton.  That said, the staff was still ultra helpful and just plain fun to hang out with.

I’m glad to be there, and I’d be honored to attend next year even if I just spend another four days hanging out with cool authors who like to talk shop as much as I do.