Announcing the February Book Cover of the Month!

Another bracket has concluded, and I’m still amazed at how popular this is getting. I’d like to set a goal to do better each month, which we didn’t do this month, but we still had an amazing turnout. As I type this, we had a total of 3,911 votes. It’s just humbling to see the support people are showing these authors and their covers. Last month, I mentioned that I wasn’t sure March was going to hold up against January. I feel confident that March is going to be even tougher. But that’s the past, and the future. It’s time to talk about the present.

The February Book Cover of the Month is…

The Unleashed by Bentz Deyo! If you’re curious about how I felt about the book, check out the Facebook post that I posted when this book first landed on the bracket, here.

Deyo is the first author to win a BCOTM competition as a previous month’s alternate. He lost to Loveless last month, and was hell-bent on not losing this time. Let’s look at the stats!

The Unleashed started out strong and finished superhuman. He went Hulk in the semifinals and didn’t slow down very much in the Finals. I was talking to both he and Joshua Robertson during the semifinals, and they were both going out of their minds looking for ways to get word out about the bracket. The Unleashed received 802 out of 3,911 total votes (21%, give or take what votes may come in the next 40 minutes). Age of Myth by Michael J. Sullivan couldn’t muster up enough votes to take down Deyo. Sullivan’s 320 total votes still don’t compete with Anaerfell’s 574 votes. Or even the 350 votes Robertson garnered in the last round alone. Without intending disrespect to Mr. Sullivan, it looked like the winner of his previous match was just going to be too tough to take down.  Deyo took the finals 184-32. 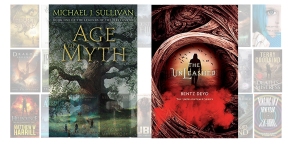 A note on how I run the bracket. I’m a huge fan of Robertson and the showing he had, but I have a football mentality. Even though I recognize the right half of the bracket was probably stronger than the left half, Myth made it to the finals. For this reason, Myth will receive an automatic bid into next-month’s bracket. This is just the MOST FAIR way I have found to fill out a bracket. If I had another slot, it would have gone to Robertson, but if I deviate from what I have been doing, I invalidate the integrity of the competition. That’s important to me. It doesn’t mean we won’t see Robertson or Boyd (or both) again, but not in next month’s bracket.

The Unleashed is the second book in the Undelightened Series. Here’s the summary on Amazon:

Leam Holt has done the unthinkable. He’s saved Harbing from utter destruction by consuming the toxin that was intended for the entire town and he’s rescued Eloa’s father from Darkness Headquarters.

But at what cost? Stricken by the poison and unable to remember who he is or access his Light side, Leam is captured by Gideon. Surrounded by evil, Leam revels in his undiluted Dark power and connects with other violent and corrupt kids, especially the bold and gorgeous Rylan. Still, Leam struggles to piece together his memories, including those of the beautiful Eloa, whom he discovers is in grave danger.

While forces of Light work to free Leam, the world is thrown into turmoil. The battle over the prophet, the person who will lead the world into complete Darkness or Light, is heating up, and Leam’s role in the war grows murkier.

As always, I’ve purchased the book and added it to my TBR. (For those who are new to the deal, I buy the Book Cover of the Month to read and review in the future. I bought Manning’s cover, and Howard’s cover and they are also on my TBR. Manning’s is on deck while I finish reading the book I just started this week.)

The artist for this cover is Lisa Pompillo.  I’ll reach out to her and see if she’d like to have an interview later on in the week.  Until then, have a peek at her website and see her work! Mr. Deyo was kind enough to offer the following comment:

“It’s a great cover,” he said. “The book ain’t half bad either. Thanks for the votes!” Then he used a smiley face emoji with shades, but I don’t speak emoji, so I can’t replicate it. I am, however, obsessed with accurate reporting, so there ya go!

The March bracket is ready to go and will launch on April 1. It looks great, and I’m pretty pleased with how April is setting up.

I will continue to identify and select covers for each day from Amazon’s New Release section for fantasy and science fiction. If you follow and like my Facebookpage, you can see what covers will make the bracket.

25 thoughts on “Announcing the February Book Cover of the Month!”